Speaker Mūrniece to President of Greece: Together we can overcome geopolitical challenges 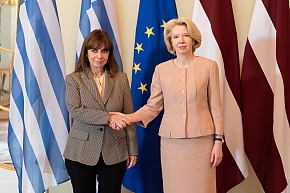 Latvia and Greece are like-minded democratic states. The friendly relations and mutual understanding are the basis for closer cooperation while jointly facing unprecedented geopolitical shocks in Europe. This was emphasised by the Speaker of the Saeima Ināra Mūrniece on Friday, 3 June, during a meeting with the President of the Hellenic Republic Katerina Sakellaropoulou. The President’s visit to Latvia was organised to mark the centenary of diplomatic relations between the two countries.

A sustainable peace on our continent can only be ensured by Ukraine’s complete victory and the loss of Russia in its own war, emphasised Speaker Mūrniece. In response to the crimes committed by Russia in Ukraine, Latvia advocates strengthening the policy of sanctions and further international isolation of Russia, she underlined.

The President of Greece expressed the country’s readiness to engage in the reconstruction of Ukraine after the war, as well as the need to investigate the war crimes committed by Russia and punish the perpetrators.

The parties agreed on the need to give the people of Ukraine a clear prospect of joining the European Union by granting EU candidate status as soon as possible. This is an important motivation to continue fighting for the future of your country. Ukraine is currently bleeding for Europe’s fundamental values and desire to live in democracy.

Speaker Mūrniece pointed out that the war in Ukraine has encouraged Latvia to strengthen its defence capabilities. Our country will increase the resources needed for defence, and at the same time, the upcoming NATO summit in Madrid needs to take decisions in line with the new security situation. In the event of an attack, NATO must be able to protect its territory from the first minute. The policy of deterrence in the Eastern flank of the Alliance needs to change from deterrence to frontal defence, significantly increasing the presence of allied forces in the region.

During the meeting, also the successful cooperation of both countries in international organisations was discussed.

During the todays meeting with the President of Greece, Speaker Mūrniece was accompanied by Atis Lejiņš, Deputy Chair of the Foreign Affairs Committee, and Vita Anda Tērauda, Member of the European Affairs Committee of the Saeima.