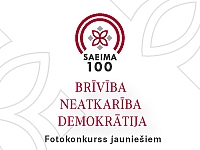 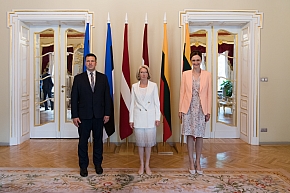 I am very pleased that we can resume the tradition interrupted by the pandemic – the tripartite meetings between the Speakers of the Latvian, Lithuanian and Estonian Parliaments, where we discuss the topical issues on the agenda of the Baltic States and their Parliaments. This allows us to coordinate our opinions and agree on common positions so that the united and strong voice of the Baltics is heard in the international arena. This was emphasised by Ināra Mūrniece, Speaker of the Saeima, receiving Jüri Ratas, Speaker of the Parliament of the Republic of Estonia (Riigikogu) and Viktorija Čmilytė-Nielsen, Speaker of the Parliament of the Republic of Lithuania (Seimas).

Active cooperation between the Baltic States is essential in overcoming the consequences of the pandemic. We must continue to work on ensuring economic and social stability in the region and implementing joint infrastructure projects, including the joint implementation of the Rail Baltica railway line project, as well as the synchronisation of the electricity networks of the Baltic States.

With regard to the situation in Belarus, Speaker Mūrniece expressed solidarity and preparedness to provide practical help to Lithuania, which is currently experiencing a crisis of illegal immigration. “We are worried about the Belarusian regime trying to exploit illegal migration to exert political pressure. At the same time, it is clear that this situation must be resolved at the level of the European Union, since Lithuania’s border is also the external border of the EU," Mūrniece emphasised.

The participants of the meeting reaffirmed the strong support of the Baltic States to Ukraine in its reform path. The Speaker of the Saeima stressed that the Baltic States should work together to promote wider international participation in the Crimean Platform – an international initiative that is to focus on the promotion of Crimean de-occupation and will be officially opened in August. Latvia sees this as an important format for maintaining the issue of the Crimean de-occupation on the international agenda, and a Group for the support of the international Crimean Platform has been established in the Saeima for this purpose.

Discussing the challenges posed by the pandemic, the Speakers of the Baltic Parliaments agreed that the summer time should be used to achieve the widest possible vaccination coverage, which would allow economic activity to be maintained in the autumn, as well as to ensure children’s return to schools. At the same time, the drop in vaccination rates observed in all three countries is a source of concern, which necessitates the search for new, unconventional ways to reach out to the public about the need for vaccination.

The Head of the Latvian Delegation to the Baltic Assembly Jānis Vucāns also participated in the discussion between the Speakers of the Baltic Parliaments, and presented the latest developments in the Baltic interparliamentary organisation.

Within the framework of the visit, the Speakers will also meet with Jānis Sārts, Director of the NATO Strategic Communications Centre of Excellence, to discuss the challenges posed by disinformation in the Baltic region.