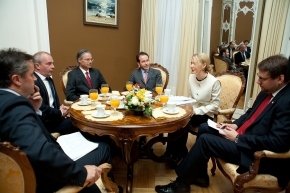 This week, the British-Latvian All-Party Parliamentary Group led by Christopher Pincher is visiting the Saeima. During the meetings held on Monday, 24 September, issues such as interparliamentary cooperation between Latvia and the United Kingdom, as well as economic development, were addressed.

British parliamentarians met with Inese Lībiņa-Egnere, Deputy Speaker of the Saeima; Vjačeslavs Dombrovskis, Chairman of the Economic, Agricultural, Environmental and Regional Policy Committee; as well as with the group for interparliamentary relations with the United Kingdom of Great Britain and Northern Ireland chaired by Valdis Liepiņš.

Lībiņa-Egnere welcomed the parliamentarians from the United Kingdom to the Saeima and expressed her satisfaction with the constructive and good bilateral cooperation which is based on mutual understanding.

The Deputy Speaker noted that relations between the two countries are facilitated by excellent interparliamentary cooperation which has a strong foundation because both parliaments have established groups for cooperation with the parliament of the other country. Nevertheless, Lībiņa-Egnere acknowledged that this interparlaimentary cooperation can be improved even further through more active and in-depth cooperation between sectoral committees of both parliaments. Furthermore, the principles set forth in the EU’s Treaty of Lisbon, as well as the increasing role of national parliaments, heighten the need for exchange of parliamentary experience.

During the meeting with Inese Lībiņa-Egnere, the Deputy Speaker also explained the daily routine of the Saeima and informed the guests about the status of topical draft laws currently under consideration. British parliamentarians were interested in hearing about the parliamentary election system in Latvia and representation of voters’ interests.

During the meeting with Vjačeslavs Dombrovskis, Chairman of the Committee explained Latvia’s tax system, as well as the current situation in Latvia’s economy. He admitted that although the path of economic recovery and reforms was not easy, it has laid a sound foundation for Latvia’s economic growth.