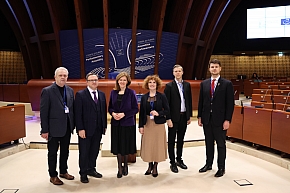 Until 27 January, Strasbourg (France) is hosting the 2023 winter session of the Parliamentary Assembly of the Council of Europe (PACE), featuring the first-ever participation of the 14th Saeima delegation to PACE.

“The Parliamentary Assembly of the Council of Europe is crucial in defending democratic and human rights values. It is our duty to stand up for these fundamental values. Proactive involvement of the Latvian delegation in the work of the Assembly, including the drafting of and deliberations on its most important documents, as well as the decision-making process, is one of the practical ways of achieving this,” highlighted Zanda Kalniņa-Lukaševica, Head of the Latvian delegation to PACE, following the approval of the mandates of the new Latvian delegation.

MP Kalniņa-Lukaševica was included in the Bureau of the Assembly due to the upcoming Latvian presidency of the Committee of Ministers of the Council of Europe. The Member of the Saeima will now be required to participate in the work of the PACE Bureau and the Standing Committee and the Joint Committee, which are the main committees organising the work of PACE.

One of the main events of the PACE January session is the upcoming debate on 26 January on the legal and human rights aspects of Russia’s aggression in Ukraine. Oleksandra Matviichuk, Head of the Centre for Civil Liberties of Ukraine and Nobel Peace Prize Laureate 2022, will also participate in this debate.

The session agenda also focuses on preventing violence against women and features, among others, a debate on conflict-related sexual violence. This issue is particularly topical in the context of the war crimes committed by Russia in Ukraine. The debate will be followed by discussion on the Istanbul Convention.

As part of the PACE winter session, a report titled “The Road to Reykjavik” will present PACE proposals on the 4th Summit of Heads of State and Government of the Council of Europe that will take place in the capital of Iceland on 16 and 17 May. Discussions and approval of a report on Moldova are also on the agenda.