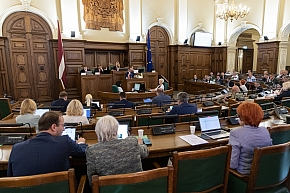 On Thursday, 14 July, the Saeima supported Draft Laws ratifying the protocols on the accession of the Republic of Finland and the Kingdom of Sweden to the North Atlantic Treaty Organisation.

“The accession of Finland and Sweden to the Organisation is important to maintain the trust in NATO’s open-door policy, especially now when the Organisation is under pressure due to Russia’s demands toward NATO shortly before its wide-scale invasion in Ukraine”, highlighted Rihards Kols, Chair of the Foreign Affairs Committee, which is responsible for advancing the Draft Law in the Saeima, stating that Latvia has consistently defended the right of all states to determine their own security policy, membership in alliances, and their future as a whole.

The accession of Finland and Sweden to NATO will strengthen the joint military capabilities of the alliance in the Baltic Sea region, as well as boost its capacity both in terms of deterrence and collective defence, said Rihards Kols.

As stated in the summary of the Draft Law, in light of the war waged by Russia in Ukraine, its aggressive rhetoric, and the potential to escalate the security situation in the Baltic Sea region, accelerating the accession of Finland and Sweden to NATO is in the interest of Latvia and its allies.

The signing of the Accession Protocol initiated the ratification process, during which NATO member states will ratify the Protocol in accordance with their national procedures. Once the Protocol is signed by all member states, the process of ratifying the North Atlantic Treaty will begin in the Republic of Finland and the Kingdom of Sweden in accordance with their national ratification procedures.