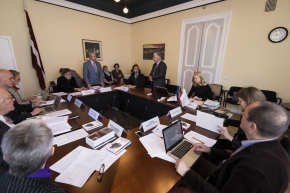 On Tuesday, 6 October, having convened in the Saeima to evaluate the nominees for the Baltic Assembly (BA) prizes, an international jury decided to award this year’s Prize for Literature to the Latvian writer Māris Bērziņš, author of the novel “Svina garša” (Taste of Lead). The novel, published earlier this year, portrays fateful events in the lives of Latvians at the beginning of World War II.

The BA Prize for Arts will be awarded to the Lithuanian conductor Modestas Pitrėnas for strengthening the synergy among the cultures of the Baltic countries through performances at Latvian, Lithuanian and Estonian concert halls and theatres.

The Prize for Science will be awarded to the Estonian nominees Eva-Clarita Pettai and Vello Pettai for their monograph “Transitional and Retrospective Justice in the Baltic States”.

The monetary value of each prize is EUR 5000. The awards ceremony will be held as part of the annual BA session on 19-20 November in Vilnius, Lithuania.

The international jury was composed of nine experts in literature, science and the arts from Estonia, Lithuania and Latvia.

The other nominees in each category were:

The BA Prize was established in 1994 and since then has been awarded to several well-known scientists, artists and cultural workers. Last year the Prize for Arts was awarded to Alvis Hermanis, Stage Director of the New Riga Theatre, for the production of numerous theatre performances, notably the play Oblomovs. The Prize for Literature was awarded to the Estonian writer Peeter Sauter for his novel Do Not Leave Me Alone („Ära jäta mind rahule”), 2012. The Prize for Science went to the Lithuanian professor Dr.habil. Juozas Vidas Gražulevičius for his significant achievements in materials chemistry and engineering, as well as for active collaboration with scientists from the other Baltic countries in initiating and conducting research projects.