The Saeima is the legislature of the Republic of Latvia. It is the only public authority in Latvia with the right to adopt laws. Draft laws may be submitted to the Saeima by the President of Latvia, the Cabinet of Ministers, committees of the Saeima, at least five MPs, and, in accordance with the procedure and to the extent set forth by the Constitution, at least one tenth of the electorate.

A special procedure for amending the Constitution

Consideration of draft laws in committee meetings and plenary sittings

In the first reading at the committee meeting and the plenary sitting, MPs only consider the concept of the draft law, namely, the draft law as a whole without changing the wording. Not only MPs and relevant public authorities, but also experts and representatives of the society participate in committee meetings and discuss draft laws. However, only members of the responsible committee may vote on a draft law.

When considering a draft law at a plenary sitting of the Saeima, MPs may make a decision with a majority vote of at least half of the Members present (not less than 50 MPs). If a draft law is supported by the Saeima, a deadline for submitting proposals for the next reading is set.

During the second and third readings at the committee meeting and the Saeima sitting, MPs debate on proposals submitted regarding specific articles or their parts. Proposals on amendments to a draft law may be submitted by a committee of the Saeima, a parliamentary group, individual MPs, as well as the President, Prime Minister, Deputy Prime Minister, a minister, the parliamentary secretary of a ministry (authorised by the respective minister), and the Ombudsman. Proposals related to the legislative technique, codification, and conformity of the proposed wording with existing laws are submitted by the Legal Bureau of the Saeima. Only the responsible committee may submit proposals on the draft law beyond the set deadline. After examining all the submitted proposals, MPs vote on the draft law as a whole.

A law adopted by the Saeima comes into effect only after it has been promulgated by the President. A law enters into force 14 days after its promulgation, unless specified otherwise in the law itself.

Reconsideration of a draft law

According to the Constitution, the President has the right to veto a law, namely, request its reconsideration or suspend its proclamation in accordance with a specific procedure.

If the Saeima, by not less than a two‑thirds majority vote, determines a law to be urgent and the law is adopted in two readings, the President may not request its reconsideration, and the adopted law is to be proclaimed no later than within three days after the President has received it. 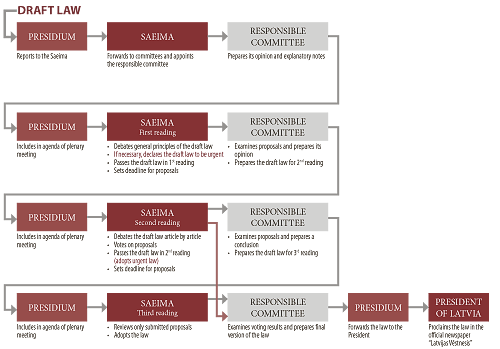