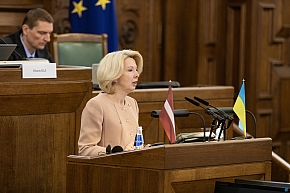 The Three Seas Initiative covers 12 countries between the Adriatic, Baltic, and Black seas and aims to promote the development and connectivity of the region. We have the prerequisites for growth, but we also need to foster both cooperation and private and public investment to develop infrastructure projects, said the Saeima Speaker Ināra Mūrniece at the opening of the Three Seas Initiative Parliamentary Forum at the Saeima on Tuesday, 21 June.

The Saeima Speaker stressed that all the countries united by the Three Seas Initiative are democracies, and many of them have also experienced totalitarianism. We have managed to successfully develop and transform our societies so that the past is no longer a heavy burden, and we are members of the European Union, said Speaker Mūrniece, adding that it is in the interest of all democracies to safeguard democracy.

Our primary task is Europe's security, which has been seriously challenged by Russia's attack on Ukrainian democracy, Mūrniece noted. The presence of Olena Kondratiuk, Deputy Speaker of the Ukrainian Parliament, as the guest of honour of the Parliamentary Forum, reminds us about the resilience of democracy—the Ukrainian Verkhovna Rada keeps working even in times of war.

We must help Ukraine to win this war by all means at our disposal. We are interested in lasting peace in Europe, and Russia's interests are at odds with that, said Mūrniece, noting the duty to help Ukraine with weapons supplies, to keep the sanctions imposed on Russia, and to continue the isolation of both Russia and its satellite, the regime of Alexander Lukashenko. The Three Seas Initiative countries also support Ukraine by welcoming refugees, the Saeima Speaker stressed.

Mūrniece also highlighted the challenges we are currently facing. High energy prices are raising the cost of living. We must switch our energy supplies and get rid of our dependence on Russia. This is a challenge, and we have no other alternatives, emphasised the Speaker of the Saeima.

Rihards Kols, Chair of the Saeima Foreign Affairs Committee, stressed that it is precisely the parliamentary dimension where political decisions can be strengthened, justified, and given legitimacy.

The Foreign Affairs Committee Chair noted that the war waged by Russia in Ukraine would have long-lasting, negative, and severe economic consequences. "Recent history gives examples of our work aimed to protect the people of our countries and improve their living conditions," said Kols, hoping that the Parliamentary Forum would serve as a basis to further develop specific ideas.

Rihards Kols paid tribute to Ukraine's struggle to defend its own and our common freedom. In addition, the decision taken on the eve of the Forum to enhance partnership with Ukraine within the Three Seas Initiative will help rebuild Ukraine.

The Three Seas Initiative was established in 2016 to promote unity and convergence among 12 Member States of the European Union, with a focus on infrastructure, energy, and digital connectivity. The initiative brings together Latvia, Austria, Bulgaria, Croatia, the Czech Republic, Estonia, Hungary, Lithuania, Poland, Romania, Slovakia, and Slovenia.