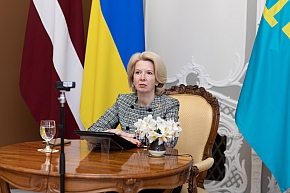 The Speaker of the Saeima noted that, in 2019, the Saeima decided to recognise the deportations of the Crimean Tatars and repressions against them as genocide committed by the Soviet regime and repeatedly condemned the 2014 annexation of Crimea by Russia. In addition, Latvian law‑makers stressed the need to continue a strong policy of non‑recognition of the annexation of Crimea, stated Mūrniece, expressing that Latvia would not allow this issue to disappear from the international agenda.

The citizens of Ukraine, including the Crimean Tatars, have been valiantly fighting and astonishing the world for almost three months already. Ukraine has showed that patriotism and unity are unbreakable forces, even in a fight against a brutal power. The heads of democratic countries around the world have acknowledged the resilience of Ukraine and the professionalism of its Armed Forces, noted Mūrniece, stressing that the democratic world supports Ukraine in its fight against the aggressor.

“We do not know how long Russia will keep attacking, but we do know that the war will end. We stand in solidarity with you, dear friends,” said Speaker Mūrniece.