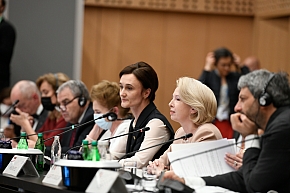 Ukraine needs strong military, political, and humanitarian support in the current circumstances. It is in Europe’s interests that Ukraine remains an independent country that has chosen to live in a democracy. At the same time, Ukraine should be given a clear perspective of joining the European Union (EU), which would be a strong motivation to endure the cruel war while fighting for its freedom. This was underlined by Ināra Mūrniece, Speaker of the Saeima, in the Conference of Speakers of EU Parliaments in Slovenia.

Ukraine’s fight against the Russian aggression, defending its democratic choice to be part of Europe, removes any doubts about the ability of this nation to turn its long-term vision into reality, said Speaker Mūrniece.

The way the EU responds to the war in Ukraine will define the geopolitical role of the Union in security and defence policy, stressed the Speaker of the Saeima. The EU now needs to strengthen its defence, prevent its long-term dependence on Russian energy sources, and strengthen cooperation with like-minded partners.

The Speaker of the Saeima informed colleagues about the visit of the Speakers of the Baltic Parliaments to Kyiv on March 24 — one month after the Russian invasion. Mūrniece stressed that the Ukrainian Parliament, despite the military threat, continues its work. The Ukrainian officials are thankful to the EU countries for both the decision to provide military assistance and humanitarian support in hosting Ukrainians fleeing the horror of war. Speaker Mūrniece extended to her colleagues the invitation of the Speaker of the Ukrainian Parliament to visit Ukraine as a token of solidarity with the Ukrainian people.

Ināra Mūrniece, Speaker of the Saeima, is on a working visit to Slovenia, where she participates in the Conference of Speakers of the European Union Parliaments to discuss the role of national parliaments in policy-making in emergency situations, including strengthening the resilience of democratic governance, as well as the EU’s role as guarantor of stability, security, and prosperity in the region and beyond.