Speaker of the Saeima visits Kyiv to meet with Ukrainian leaders 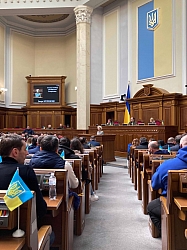 One month after Russia’s invasion in Ukraine, in solidarity with the Ukrainian people and the country’s Parliament, Ināra Mūrniece, Speaker of the Saeima, together with the parliament speakers of Lithuania and Estonia, went to Kyiv to meet with the President, Chairman of the Parliament, and Prime Minister of Ukraine. During the visit, the parliament speakers of the three Baltic States and Ukraine signed a joint declaration, condemning Russia’s aggression and expressing support for Ukraine and a fast‑track procedure for its accession to the European Union.

The declaration expresses commitment to stop aggression and renew security in Europe through joint efforts, supporting Ukraine in every way possible and making Russia pay a higher price for its aggression. In addition, the parliament speakers call on the international community to establish a no‑fly zone over the territory of Ukraine to prevent civilian casualties and to impose a trade embargo on Russia.

In the declaration, the parliament speakers emphasise the need to grant the EU candidate status to Ukraine. In addition, the declaration expresses support for NATO’s “open door” policy. According to the speakers, Russia must remain excluded from the international community. The speakers also emphasise that the war crimes committed by the Kremlin regime must not go unpunished.

Looking forward, we need to start thinking about the rebuilding of Ukraine, states the declaration, which also expresses commitment to supporting comprehensive assistance for the economic recovery of Ukraine.

The parliament speakers of the Baltic States met with Volodymyr Zelenskyy, President of Ukraine, Ruslan Stefanchuk, Chairman of the Verkhovna Rada, and Denys Shmyhal, Prime Minister of Ukraine.

Ināra Mūrniece, Speaker of the Saeima, together with her Estonian and Lithuanian counterparts, addressed the Ukrainian parliament, affirming the support of the Baltic people for the people of Ukraine, who are defending democracy and fighting against Russian invaders.