Speaker Mūrniece: Our state and people stand for Ukraine in the European Union 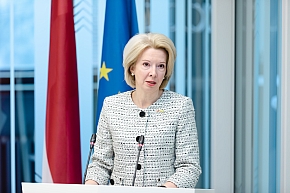 "The institutions of the European Union should be able to find a way to quickly respond to Ukraine’s request to accept it as a member state. The European Union is not only an institution, but also its citizens. We, the parliamentarians from the EU member states, represent the will of our voters. Ukraine must be in the European Union! Our state and our people society stand up for it,” said Ināra Mūrniece, Speaker of the Saeima, opening the conference ”Baltic EU Conversations 2022: Immediate Challenges and Long-term Vision".

Speaker Mūrniece stressed that in a situation where the Russian leadership denies the Ukrainian statehood and nationhood, and wants to deprive it of its right to exist, we must clearly state to the Ukrainians — we, Europeans, stand with you, and you stand with us in Europe.

The position of the Saeima on this issue is clearly defined in the statement unanimously adopted on 3 March on granting Ukraine the status of candidate state for membership in the EU, said the Speaker, also noting that Latvia has been extensively helping Ukraine by sharing reform experience in order to facilitate Ukraine’s compliance with the high criteria for becoming an EU candidate country.

Speaker Mūrniece noted that our immediate challenge is to stop Russia’s attack on Ukraine. “We condemn this aggression in the strongest possible terms. The main and most pressing task is to repel the enemy and save the people,” said the Speaker, noting that EU member states have demonstrated their unity and ability to react quickly, reinforcing sanctions against the Russian regime, using them as an financial instrument against the Russian war machine in order to stop the aggression.

“Today, Russia has turned into an enemy of democracy — by oppressing its citizens, attempting to destroy the Ukrainian people with brutal force, and by trying to weaken and divide Western democracies,” said the Speaker.

Speaker Mūrniece noted that “In the long term, it is important to address the issues of how to build a post-war Europe, how to provide the most effective support to Ukraine, and ensure the irreversibility of democracy”.

In order to better understand Ukraine’s desire to join the EU, the Speaker of the Saeima looked back at Latvia’s accession. “The EU member states can once again demonstrate their wisdom just as many years ago when the 2004 enlargement of the EU took place. The reunification of Latvia and the rest of the Baltic States, as well as other nations behind the Iron Curtain with the European political continent was manifested in their accession to the EU. Now we can see that this has been the only right way — both for Latvia and for the EU," said Speaker Mūrniece, urging similar action in the case of Ukraine.

The conference ”Baltic EU Conversations 2022: Immediate Challenges and Long-term Vision" is organised by the Saeima in cooperation with the Latvian Institute of International Affairs and the Representation of the European Commission in Latvia.