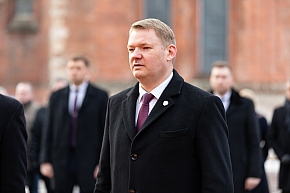 “Back then, it seemed as though the entire Latvia were barricading. Physically here in Riga, across Latvia, and figuratively—in people’s hearts. A united, unbreakable wall of courage and determination. People came from all regions and cities to defend their freedom, not because it was officially organised by the authorities, but upon invitation of the Popular Front. Without hesitation or second thoughts,” said Edvards Smiltēns, Speaker of the Saeima, on Friday, 20th January, lighting the commemorative bonfire on the Commemoration Day of Participants of the 1991 Barricades.

“January, barricades, bonfire smoke, courage, unity, and self-respect. Over the past 32 years, these phenomena and sensations have turned into common stories of reminiscence and pride for many families in Latvia. It is because, recalling January 1991, there are so many who can say—yes, I was there!” noted the Speaker of the Saeima in his address.

Back then, as unarmed people were ready to stand against an empire, knowing the power of its cruelty and violence from the history of their own people, it seemed as though the empire would collapse. But, as it turns out, the desire for violence and oppression has not disappeared in the East. The empire of evil has returned with renewed force, only, unlike back then, it is not hiding behind slogans about democratisation, reconstruction, and openness, said Smiltēns.

“The desire to oppress and dominate others is apparent on a terrifying scale. The cruel face of the empire is clearly visible, as it murders, rapes, and destroys in Bucha, Irpin, Mariupol, and Dnipro. It is clear that the Soviet Union is only collapsing now—on the battlefields in Ukraine, in the hearts and minds of people,” said the Speaker of the Saeima, affirming that we are finally relinquishing the past in our own country too, instead looking toward the future that we rose to defend in January 1991.

“Has our country become like the one that we envisioned back in those days and nights? We are still building our country. Free, independent, democratic. A country where we speak our own language, take our own decisions, make our own choices. Yes—make mistakes as well, but it is in our power to fix them,” said the Speaker of the Saeima, wishing that the smell of the bonfire smoke would remind us of our ideals and dreams. Of the source of our power and courage. Of people and of Latvia—free forever more and worth every sacrifice.