NewsPress releasesEdvards Smiltēns in the Ukrainian Parliament: Closing the gateway to hell in Ukraine is the duty of the entire civilised world

Edvards Smiltēns in the Ukrainian Parliament: Closing the gateway to hell in Ukraine is the duty of the entire civilised world 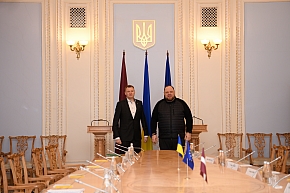 “With your heroism, you have achieved the impossible — a real awakening! Both on the battlefields and by transmitting such a powerful push of courage and determination that it has reached every corner of the free world, touching the hearts of billions of people. It has cleared the mist of illusions and created an unprecedented rise of solidarity and cooperation, and urged our nations to remember and appreciate what matters most — our freedom, independence, and democracy," said Speaker of the Saeima, Edvards Smiltēns, on Thursday, 12 January, addressing Ukrainian parliamentarians of the Verkhovna Rada in Kyiv.

"Actually, the Soviet Union is finally collapsing, as we speak. It is falling to pieces in the Ukrainian battlefields, and in our hearts, both geopolitically and humanly”, said E.Smiltēns. The Speaker of the Saeima noted that the Soviet Union is collapsing in a symbolic time, exactly in the 100th anniversary of the creation of the Soviet Union, which the bloodthirsty Russian dictator had intended to revive in an even more repugnant form by opening the gateway to hell on Ukrainian land. “Closing the gateway is the duty of the entire civilised world,” said E.Smiltēns.

“Your strength inspires us at home to do things that we have been postponing for years, to take big steps away from the Soviet heritage, from the imperial influence of a neighbour, from the darkness of the past, to eliminate the symbols of occupation. Gaining real freedom and joining efforts in support for Ukraine,” said the Speaker of the Saeima, emphasising the wide-spread solidarity and engagement of our people. “Aid cargoes are sent every day from Latvia. It shows that it is not just about politics or inter-state relations. It’s about something much more important. Something that comes from the hearts of the people, from the very foundations of humanity. It’s about deeply rooted common values, it’s about knowing good from evil, knowing truth from lies. And people in Latvia possess that knowledge,” said E.Smiltēns.

The Speaker of the Saeima emphasised that already in the first days of the Russian aggression Latvians donated the first millions of euros, and continue to make donations. “Our people are proud to help you in Ukraine, and also in creating a welcoming place for those thousands of your compatriots who were forced to leave their homes due to the war and find shelter in our land,” said the Speaker of the Saeima.

“The entire civilised world now has the duty of proving that the world is governed by the rule of law, rather than brute force! So that the evil no longer dares to revive!" said E. Smiltēns, stressing that Latvia clearly advocates Russia’s international isolation, strengthening the sanctions regime and achieving Russia’s accountability.

“We rejoice for every success you achieve, and we mourn for every one of your fallen. As if they were our people. This is a genuine brotherhood. We not only see, but also feel. We not only know, but also understand. Because we have experienced this as a nation in our own past. This is the DNA of our nation that runs in our blood, because we also won our freedom through pain and bloodshed," said E.Smiltēns.

E.Smiltēns confirmed that Latvia’s political, military, financial, humanitarian and human support will continue. “No matter how much it would cost and how long it would take. We, along with our partners, are clear and resolute about this – we will not give up," said the Speaker of the Saeima.

“I know that in Europe, the flag of an independent, thriving Ukraine, which has now become a global symbol of freedom and courage, will be proudly waving alongside the flags of other countries. You have already earned your place in Europe, which will be free, strong, cohesive and safe,” said E. Smiltēns.