Winning works of the photo contest “Freedom. Independence. Democracy” exhibited at the Saeima 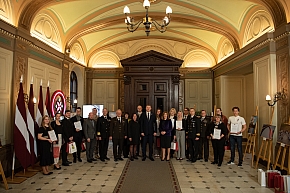 On Thursday, 10 November, an exhibition of the youth photo contest “Freedom.  Independence. Democracy” was opened at the Saeima building, and the contest winners and their teachers were celebrated during the event.

“Thank you for turning the somewhat abstract concepts of freedom, independence, and democracy into clear and powerful visual symbols that allow many more people, including your peers, to feel and reflect about our country—our Latvia. A free, independent, and democratic Latvia,” said Edvards Smiltēns, Speaker of the Saeima, while addressing the contest participants during the opening of the exhibition.

The Speaker of the Saeima noted that freedom, independence, and democracy are values that were upheld by one of the founding fathers of our national democracy—Jānis Čakste, President of the People’s Council and the Constitutional Assembly, and the first President of Latvia. These values exist and have been part of us for over one hundred years. They were established at a crucial time for Latvia. Moreover, we, Latvians, are at a historic point every day, because everything we do is aimed at strengthening these three traditions, said Speaker Smiltēns, expressing confidence that the youths attending the opening will also have the opportunity to experience decisive moments for our country and our nation, understand their importance, and make the correct and necessary decisions.

The Saeima exhibition features 12 winning works of the photo contest “Freedom. Independence. Democracy”, sent in by nine contestants. The photo contest was organised to mark the centenary of the Saeima and in preparation for the Lāčplēsis Day. In order to participate in the contest, the youths had to take photos to depict our fundamental values—freedom, independence, and democracy—as part of their lives and the life of the state.

Following the opening ceremony, the contest winners and their teachers went on a tour of the Saeima building, visited the Patrol Boat Squadron of the Latvian Naval Forces of the National Armed Forces of Latvia, and went out to sea on a patrol vessel P-08 “Jelgava”. During their visit of the Patrol Boat Squadron, the contest winners participated in a flower-laying and wreath-lowering ceremony to commemorate British, French, and Irish seamen who gave their lives in the Latvian War of Independence in 1919.

The photo contest was organised by the Defence, Internal Affairs and Corruption Prevention Committee of the Saeima in collaboration with the National Armed Forces, the Young Guard Centre, and the House of Jānis Čakste museum.